Hive of scum and villainy: Red Bull have instructed new Double World Champion, Sebastian Vettel to start using his Jedi mind powers at the start of each race, not just for the rest of it, writes our mythical energy field correspondent, Garth Foal.

Following recent tardy getaways in Japan and stuff, the 24 year old German has been criticised for being slow off the mark when it comes to harnessing the hokey religion.

“Seb fast, he is,” one short, anonymous, wizened green commentator told us. 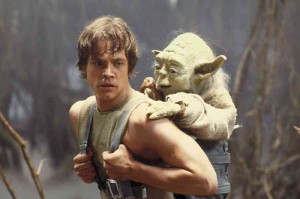 “And maybe think of something more inventive than sticking your frigging finger in the air every race, as well”

“But wise is he not with the getaway.  Learn he must from before he selects 1st gear; not just on lap 2,” he said prior to levitating his Toyota Prius out of its cramped parking space to a spot but a metre from in front of his clawed feet.

The Force, an energy field that surrounds us, penetrates us and binds the galaxy together is especially strong with Sebastian; enabling him to do things like drive much faster than everyone else and move salt and pepper pots round the breakfast table without touching them.

It’s thought that he gained the powers when his otherwise unsuitable parents conjoined during an end of pier Blackpool Paul Daniels magic special whilst the bald entertainer was pretending to saw a woman in half in front of a smattering of bored children.

The resulting fertilised egg was somehow then magically imbued with the unnatural space energy that is now being relentlessly exploited by an Austrian industrial drinks company, probably for evil purposes though the future clouded with uncertainty, it is.

“1st into first corner or not 1st: there is no 2nd,” the gargly voice continued, portentously.

“And if like in Japan he drives, probably no fucking car; I’d have the cunt off the road I would have,” he added.

It’s thought that Mark Webber is doing his practice starts with the pensioner who spends 8 minutes trying to start his car in Morrissons every Thursday lunchtime, before reversing into a waste paper bin.