Tenko: Kamui Kobayashi’s career as an F1 driver appears to be over after a disappointing Japanese Grand Prix, writes our ceremonial suicide expert, Hai Karate.

The Sauber pilot made the hari-kiri pledge, backed by his nation state’s government and millions of fellow countrymen following a dispiriting run to 12th in his home Grand Prix. 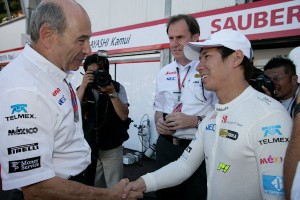 That’s a load off our re-fit bill

“But unfortunately, having given massive hope to an entire nation it could be united in joy at a run to say, the same position [he qualified in] or – at an absolute push, 6th – his somewhat lacklustre display does mean that to rescue Japan’s self-respect he’s going to have to cut his own guts out with a big sword,” he explained.

The Japanese driver has been a popular addition to the Formula 1 grid; cheekily driving others clean off the road yet somehow honing the air of a popular innocent go-getter with the aid of smiling whilst sounding comically foreign.

“But they love bone-headed recklessness, massive accidents and smiley faces even more so he has been like a breath of fresh air especially to those who said exactly the same thing when Takuma Sato was around.”

It’s believed the impudent little scamp will be able to delay the procedure until the end of the season when Sauber will release him from his contract, he will walk to the nearest Dojo wearing nothing but a pair of pajamas and a bandana and cut his guts out with this fucking big sword probably whilst wearing a cheery grin and waving.

“It could be worse; if his stock fell much further he might have ended up at Hispania,” Minge added, chuckling.