Dixons: Ferrari are to block all future Rob Smedley radio traffic without telling him, writes our communications correspondent, Buggles.

The decision by the Italian team comes after audio footage of the engineer imploring Felipe Massa to ‘destroy’ Mclaren rival Lewis Hamilton’s race was released by the F1 authorities in an attempt to convince viewers the Singapore night race was in some way entertaining.

The quote came back to haunt the 38 year old however, when he next saw his driver trundling into the pits dead last dragging the remains of his career with him. 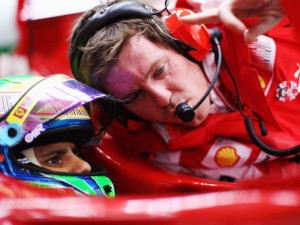 And when you see this light come on, it means, ‘get out the fucking way’

“Apparently Rob is quite a good engineer,” an insider at the team told us.

“Looks good with a spanner, knows where the engine is, never runs out of screenwash – that kind of thing.”

“But as a motivational speaker he is slightly less effective than Stephen Hawking in a 2nd division football team’s away dressing room prior to a relegation 6-pointer in the middle of a snow storm.”

“In future, when Rob speaks into the radio all Felipe will hear is either a beep signalling him to look at his pitboard the next time he comes round or, if it’s especially facile and counter-productive, some soothing music such as Greensleeves or perhaps a burst of ‘Robin of Sherwood’ by Clannad.”

Over the 3 years the Teesider has been Massa’s engineer, the gruff English northerner to suave Italian employer contrast has proved irresistably entertaining to those unable to comprehend European free movement of labour laws whilst the quirky phrasing, paternalistic epithets and constant reminders of who pays his wages so can he get out of the fucking way please? have proved an endearing sideshow to the usual dog-eat-dog world of F1.

“They’ll both be fine,” the insider continued.

“Rob’s from the north of England so is used to people ignoring him and judging by the way he drives I don’t think Massa was ever listening anyway,” he explained.

Alonso spending rest of 2017 going “I told you so”