Grange Hill: Ferrari are to hire out top driver’s punch bag, Felipe Massa to the highest bidder on the grid for ritual humiliation writes our candy-ass correspondent, Ben Dover.

The famous Italian team made its announcement after its Brazilian had once again been driven into and off the road by the bloke who humiliated him and his dad on the last lap of his home Grand Prix, 3 years ago

The same nemesis then reveled in the opportunity to remind him whose bitch he was again, by sweeping back past the forlorn 30 year old later in the race with his little finger in the air, blowing kisses out of the cockpit. 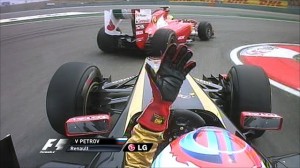 Yours for a monkey: large one, tops

“Felipe has been struggling for pace and performance all year,” performance and pace expert, Spartacus Blaze told us.

“Moving over for Michael and then Kimi and then moving over, bending down and removing his trousers for Fernando they were expecting – given the money they were paying him – but doing the same for a driver for a completely different team has forced their hand,” he added.

“Or at the very least, they figured here was another revenue stream they could exploit because it wasn’t already covered in fag and bank logos.”

Ferrari are yet to formally announce how they will package up the service but it’s believed there will be a sliding scale of charges depending on how much assistance the hapless 2008 runner-up can provide the Scuderia’s competitors.

“It will be a fairly standard pricing model,” continued Spartacus.

“Say 500 Euros a lap for holding someone up, 1,000 for blocking in qualifying right up to 10 or even 15 times that for crashing into somebody or putting a Brazilian gypsy curse on another driver by slapping them in a slightly effeminate manner once out of the car.”

“I believe Arsenal football club are currently trialling the same sort of concept with all their players,” he added.

Bottas not the type of competitor who won’t let me win, says Hamilton