Do not pass go: Michael Schumacher sparked a fierce familial war of words at the weekend when during a game of Monopoly the 7-time champion attempted to build a hotel on Park Lane at the same time as landing on it, writes our board game correspondent, Mike Buckaroo.

Winding down after a hard day’s intimidation, the 42-year-old German had agreed to a placid evening of semi-competitive entertainment round the family’s set of the popular property acquisition-glamourising game of luck and simple-minded greed.

“We were all having a lovely time,” one competitor told us. 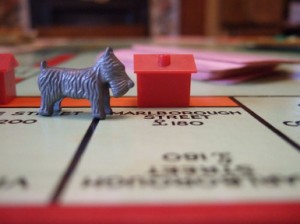 Mortgage mayhem at the Schuey residence

“Michael was obviously pumped after his afternoon’s work but was mucking in with the rest of us; he’d even agreed to forego his usual playing piece so that Ralf could finally get to be the car.”

But barely 10 minutes after he’d insisted on at the very least playing as the pewter dog, the Schumacher front room was dealt a potentially devastating Community Chest when the German attempted to purchase a hotel immediately on landing upon the world’s most expensive 2D bit of real estate.

“We were stunned,” the insider continued.

“Obviously over the years we’ve become used to Michael’s insouciant cynical rule bending but his insistence that what he was doing was completely acceptable was what threw us.”

“Even when we showed him the rulebook, he continued saying he was right because he was playing by the Italian rules whereas we only had the German.”

“Then when we tried to remonstrate with him he just stuck his fingers in his ears and began going, ‘la-la-la’ at us: it was quite extraordinary behaviour.”

“Ross [Brawn] called him – for a chat – but when Michael described what was going on they had a longer conversation which seemed to get a bit heated.”

“Michael then rang off and agreed he’d not purchase the hotel but only if Ralf put the 200 quid back he saw him nick earlier. We were back on after that, but it was a bit frosty, I can tell you.”

The result of the reconvened contest isn’t known though a later game of Twister is believed to have gotten into difficulty when the German’s claims of inveterate colour blindness sparked a fist fight over the location of a trickily placed yellow circle.