Post-Traumatic Stress Clinic: Levels of respect and affection for Michael Schumacher have returned to the level they were at when he first started in Formula 1, writes our nostalgia correspondent, Flock Tudor.

Returning to the venue of his first victory, the 42 year old German was all smiles and his old adversaries rictus masks of utter terror as friend and foe alike gathered to reminisce about the great man’s career.

“It’s funny thinking about how things have turned out – especially if you’ve not been killed or injured to the point where you can still do that,” one bag of nerves ex-competitor explained. 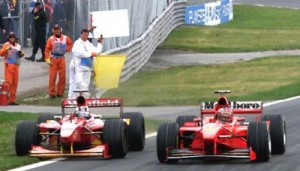 “But luckily I saw him coming some 10 years ago and rather than take my normal racing line, practically drove off the track otherwise I’d be having this conversation from a hospital bed via the same sort of contraption Steven Hawking’s plugged into.”

“20 years ago, everyone remembers this slightly shy, gangly, fresh-faced kid who was utterly charming yet blew everybody’s doors off,” one team principle reminisced, wincing slightly.

“But, you know: Ming the Merciless probably looked cute as a kid as well so why the hell should anybody be all that surprised about how much of a cheating, dangerous scumbag he turned into or how much everyone’s forgotten that now he’s shit?”

And as Michael grinned his toothy grin at the bank of assembled cameramen and journalists; the crows’ lines slightly more pronounced, forehead a little more exposed, eyes now tinged with a hint of melancholy, all but the harshest hearts put aside petty memories of bullying, sanctimoniousness, intimidation, hypocrisy and blatant cheating so as not to spoil the taste of these delicious canapes and glasses of Moet being handed round for this whatever it was they were celebrating.