Crossroads: The actor currently playing the part of Lewis Hamilton has been asked to make his driving more realistic, writes our Tinseltown correspondent, Felicity Flashbulbs.

The 2008 World Champion impressionist was warned following yet another accident, this time during the Singapore Grand Prix where he became involved in a contretemps with first-time World Champion contender, long-term loser, Felipe Massa costing each points and positions and in the case of Hamilton, future Hollywood biopic credibility.

Now, sports legend fabricators are saying the current narrative arc of hero becoming villain prior to learning an important life lesson and coming back against all the odds in a tear-jerking, group-hug, life-affirming finale is in danger of ostracising the audience before they even get into act 3. 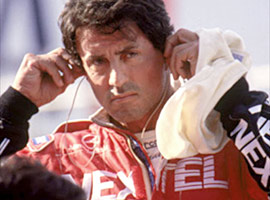 “Getting Lewis to throw his lot in with some flippity-gibbet popstar dolly bird, storming out on his father and taking up with some slimy pop svengali was a cracking set up”, this tossbag told us.

“Skewering this arrogant chutzpah via a series of dramatically staged catastrophic accidents, public descent into paranoid mania and the establishment turning against him should have been the perfect mid point backdrop for the ensuing rousing comeback and tearful family reunion denouement sometime in 2012.”

“But the point about a rousing comeback is that the bit before that – the bit where it all turns to shit– needs to stop at some point.  And Lewis is either toying with how far he can bring the audience back from the brink of abject hatred or he has – quite literally – lost the plot.”

“Unless the plot he’s doing is Karate Kid 3,” he added, “in which case: that explains things.”

The business consortium behind Lewis! ™ are thought to be considering their options especially now they can’t get Charlie Sheen and Thandie Newton is busy doing L’Oreal ads.

“They should rein him in now before it’s too late: I mean, they haven’t even done the drug addiction and wife beating yet.   If they’re not careful it will make ‘Driven’ look like Raging fucking Bull,” he added.