Norfelch: New boss Tony Fernandes today promised to remain true to Team Lotus history and values by introducing a scheme to ensure the car broke down or crashed off for disquieting reasons every 5 minutes – assuming it successfully passed scrutineering – before becoming embroiled in financial scandal and ruin, getting sold and asset stripped to the highest and most embarrassing bidders from around the world.

Speaking at the motorsports forum in Monte Carlo, the corporate chief of Air Asia spoke to reporters denying his association with the original team was tenuous and cynical and stressed the need to uphold the famous Lotus history he was sure he had written down on a piece of paper somewhere or other.. 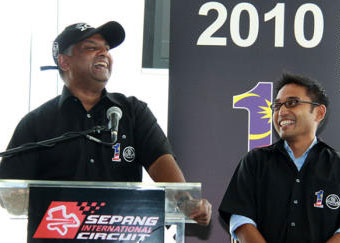 “I know some are suggesting that this is merely exploitation by an otherwise disinterested venture capitalist given access to a sport only because it’s haemorrhaging manufacturers by the transporter load”, Fernandes’ jewellery chimed, “but that would be quite unfair. We wish to extend the intimate connection we feel we have with the original Team Lotus thanks to the legitimate leasehold of the name from a reputable conglomerate of Malaysian entrepreneur gamblers who in turn bought it off of this car company that went bankrupt who in turn bought it off this bloke in a pub.”

The corporate fatso continued, “one of the first things we have decided to do to foster this deeply familial connection is to pledge to uphold true Lotus values which I understand, consists of dubiously exploiting the technical regulations then being very fast very briefly and having extremely suspect accounts. In that way I am sure millions of fans who recall the original Lotus team will respond with great affection whilst at the same time luring new fans perhaps bored of their favourite teams finishing races and winning all the time,” he speculated wildly.

The new team, which is like the old team only without being run, managed, financed or owned by anybody who had anything to do with the original will, said Fernandes, be a credit to its historically superficial predecessor: “when Team Lotus first took to the grid, F1 was a shadow of what it is today: a threadbare sport run by enthusiastic amateurs where frequently innovative, brilliant engineers built beautiful, mechanically exquisite machines for the fastest, bravest drivers the world has ever seen.”

“Fortunately, time moves on and we no longer have to live up to those values; instead Team Lotus will endeavour to match everything the modern F1 espouses: blandness, cynical corporatism, financial insolvency, dubious administrative practices, cheating and mendacity. I have absolutely no doubt that we can live up to that Formula 1 without any trouble whatsoever”, he added, absent-mindedly flicking the ash from his massive cigar all over a grubby coaster of Colin Chapman’s face.