Aylesbury Playhouse: Ralf Schumacher fans were last night coming to terms with the possibility of their driver taking a sabbatical with the Aylesbury Playhouse touring production of Puss in Boots following a collapse in talks between the grumpy German and every single team in Formula 1.*

“I am fully committed to my role”, explained Ralf in a press conference away from the usual hubbub of F1 journalists, inside his bedroom in front of a webcam. 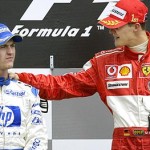 “For you, zer career iss over”

“F1 has taught me a lot and I go into my new situation full of optimism I can extract the maximum from my role as Dick Whittington.”

Ralf was later downgraded to Puss following a temper tantrum in which a derogatory, effeminate and certainly not true comment was bandied about by other cast members, hastily rebutted by a massively expensive legal team.