FOCA HQ: Bernie Ecclestone conceded that next year’s Singapore night race was a direct response to the lazy instransigance of a European audience refusing to watch F1 whenever he choose to put it on.

The short-arse multi billionaire Andy Warhol–alike made the astonishing announcement during the unveiling of a museum dedicated to his genius called, “World of Astounding Monies” in Monte Carlo.

Far from it being a tawdry gimmick, Ecclestone admitted it was a sop to falling TV figures for the other middle-of-the-fucking-night races in far flung destinations such as China, Malaysia and Japan, unless you actually live there. 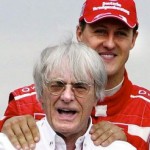 “I have tried threats, intimidation and shrugging my shoulders in that nonchalant yet slightly sinister way” he added, “but sadly it hasn’t worked and we’re going to have to start the thing at night.”

“All I can say is, I hope they’re happy when I bill the teams a million pounds each for the electricity usage and the likes of Spyker, Williams and Super Aguri go to the wall thanks to European laziness. If I had my way – after I’ve built my secret HQ Tracy Island lookalike and made my wife Queen of the Earth – I’d set fire to the lot of them,” he added.